The beginnings of A2Dominion Group can be traced all the way back to 1947.

Today’s Group is the result of a number of different housing associations coming together – all sharing a common cause of providing quality, affordable housing with a social purpose. Below is a snapshot of our journey.

Housing development in the UK focuses on new, high-rise tower blocks but many are poorly designed and built. In 1968 Ronan House in London collapses just two months after residents move in. The disaster helps to convince a group of young professionals, led by chairman Kenneth Baker MP and subsequently George Young MP, to set up Acton Housing Association – a fair-rent, non-profit organisation building quality housing.

As house prices double in the early part of the decade, Acton’s first social housing schemes, Baker House in Ealing and Monk’s Court in Shepherd’s Bush, are completed. Both are low-rise, medium density, and contain the new concept of spacious ‘gardens in the sky’.

As record numbers of people have their homes repossessed, the need for social housing is as pressing as ever. Spelthorne Housing Association is formed in 1996, following the transfer of properties from Spelthorne Borough Council. In just three years, Spelthorne grows to become Apex Housing Group, one of the most significant housing associations in the south east, owning and managing more than 5,000 properties.

In 2005, Airways Housing Society merged with Apex Housing Group to become A2 Housing Group. Winchester Housing joins A2 a year later, giving the Group 15,000 homes. By 2008, A2 and Dominion merge, forming one of the UK’s largest housing groups, A2Dominion.

To widen its market and maintain its affordable offering the Group introduces A Plus New Homes and the division is later rebranded to become A2Dominion New Homes.

In 2015, FABRICA by A2Dominion is launched. This is the Group's striking new brand for marketing its increasing portfolio of new-build homes for sale and shared ownership. Appealing to a wider audience base, FABRICA has helped the Group to grow its private development, profits from which are used to build more affordable housing.

During this time the Group sets up Pyramid Plus, a partnership with Breyer and MITIE, providing asset management services to their homes, as well as the private, public and not-for-profit sectors.

Today, A2Dominion Group has 38,395 homes across London and southern England. It employs 1,197 people and is one of the larger property groups in the UK, with more than 5,009 homes in the development pipeline. The Group regularly wins awards for its developments – homes that are built to last. 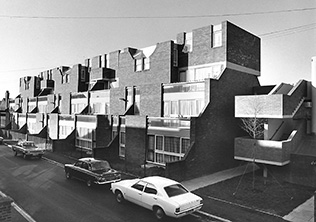