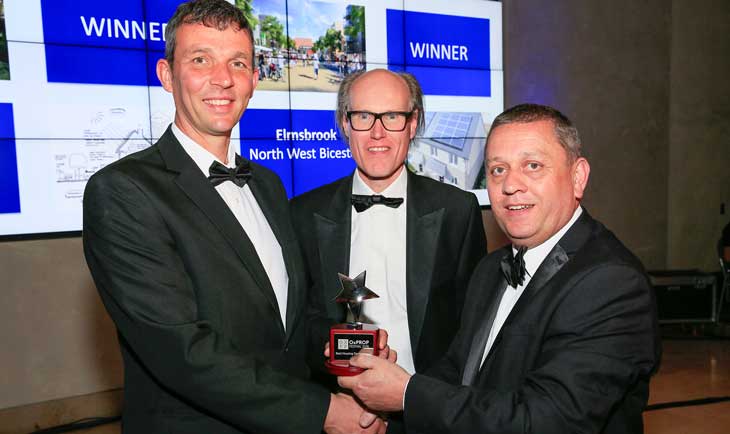 Steve Hornblow, Project Manager at A2Dominion collects Best Housing Award.
The event, which was set up this year by UK Property Forums, was held at the Bodleian Libraries, Oxford on Wednesday 18 April.

Led by residential property group A2Dominion, NW Bicester is the UK’s first eco-town project bringing investment, homes and jobs to the local area. Elmsbrook, the initial phase of the ground-breaking project has already won a number of awards since work started in 2014, including Best Sustainable Development at last year’s WhatHouse? Awards.

The group has since started work with Crest Nicholson on the next phase of the development. The developers, who recently unveiled plans of their latest £80m joint venture partnership, will deliver 232, two, three, four and five-bedroom eco-homes over the 25-acre site as part of the Exemplar phases of the Elmsbrook scheme.

Steve Hornblow, A2Dominion’s Project Director, said: “We’re delighted to have won this award and been part of what is set to be an important annual event. This is a very important development, it’s the first of its kind and a major first for us in terms of the way we build. The sheer amount of competition in the region makes winning this award even more of an honour so a huge thanks to everyone involved.”

The Oxfordshire Property Awards, is a brand new event for 2018 which commits to celebrating and bringing together the very best of the regional property sector.
Our brands