14 June 2022
A new charity store to support refugees has opened at one of our commercial units at Camberwell Road in Southwark. 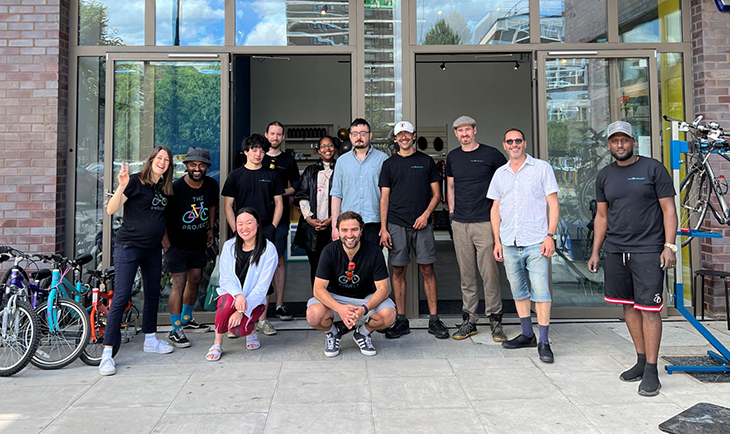 The Bike Project donates bikes to refugees and asylum seekers in the UK, with all proceeds from the shop going towards the charity’s mission of getting refugees cycling.
The store will sell refurbished bikes, clothing and accessories; as well as offering bike-servicing and repairs.

The Bike Project donates bikes to refugees and asylum seekers in the UK, with all proceeds from the shop going towards the charity’s mission of getting refugees cycling.

An asylum seeker can claim £39 a week while their case is being processed, and the bikes can help reduce transport costs, as well as improve physical and mental health.

Staff from A2Dominion and other organisations linked to the charity attended the grand opening on 11th June, and free bicycle repairs were offered to members of the public.

The store is located at A2Dominion’s Wyndham Studios development. The site was completed in March 2022 and comprises studio, 1, 2 and 3-bedroom apartments for private sale and shared ownership.

Sophia Briggs, Project Manager at A2Dominion, was amongst the attendees at the bike store opening on Saturday.

Sophia said: “Growing up in Camberwell, south-east London, it’s been a real privilege to rise to the challenge of project managing A2Dominion’s Wyndham Studios development and now seeing occupants such as The Bike Project make good use of the commercial space for the benefit of the local community.

“Seeing so many people pass through the store on the launch day willing to support their local bike shop, as The Bike Project in turn work to support refugees, was very heart-warming indeed.”

The Bike Project has donated more than 9,400 bikes to refugees and asylum seekers since 2013. They also run community engagement programmes and social action workshops.
Our brands