Green light for next phase of major regeneration in Ealing

06 January 2017
Plans to build 136 new homes as part of the next phase of a regeneration scheme in West Ealing have been given the green light. 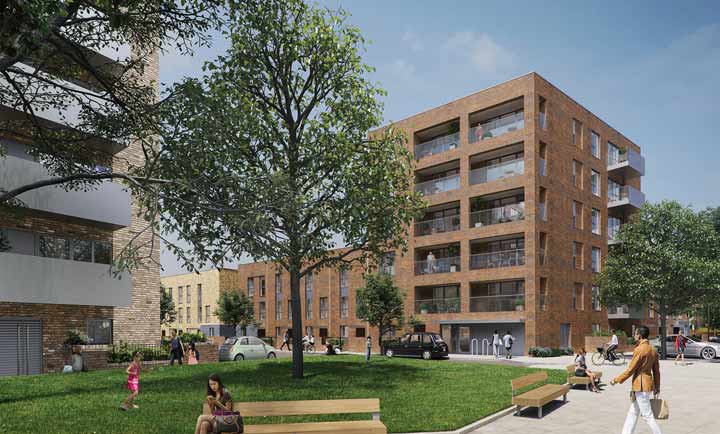 The development also incorporates community facilities including a community café
Ealing Council’s planning committee has voted unanimously to grant planning permission to A2Dominion and Rydon for Phase Three of the Green Man Lane regeneration scheme, which has been designed by Conran and Partners, Sir Terence Conran’s architecture and design practice.

This flagship development is transforming an estate in West Ealing, once plagued by antisocial behaviour into a vibrant new community, and making way for nearly 800 homes for a range of tenures, including shared ownership and affordable rent.

This phase of the scheme will deliver 136 homes. This includes a range of one, two and three-bedroom apartments and maisonettes and three and four-bedroom houses.

A central public courtyard will also be completed (begun in the previous phase of development) and a new pedestrian square containing public artwork will be built.

“It is particularly rewarding to receive such positive feedback from residents who are enjoying their new homes as well as councillors endorsing the continued success of the design."
Conran and Partners’ Partner/Project Director, Lee Davies

The development, due for completion in 2022, also incorporates community facilities including an community café, public parks and landscaped piazzas, play areas and a primary school.

“We are delighted that councillors unanimously approved this next phase of our Green Man Lane regeneration proposals.

“It was particularly encouraging to hear supportive feedback on the homes delivered so far and the project in general.

“Securing this next development phase is a testament to the project’s continuing success.

“We look forward to working further with the local community to help shape and deliver their vision for transforming their neighbourhood.”

“We are very pleased that Ealing Council has given the go-ahead to our detailed plans for the next phase of this project which is one of the largest regeneration schemes currently on site in the West London area.

“It is exciting to see how successful the regeneration work has been with the completed homes and new streets integrating successfully with the wider community.

“It is particularly rewarding to receive such positive feedback from residents who are enjoying their new homes as well as councillors endorsing the continued success of the design.

“We look forward to continuing to deliver the wider regeneration of the area over the coming years and transforming it in to a successful place for people to live, work and play.”

“We have continued to work very closely with Ealing Council to ensure the aspirations and ambitions of local people are met as this exciting scheme flourishes as part of West Ealing’s resurgence.

“With our partners we can now look to delivering this next part of the regeneration as another inspiring and well connected phase of new homes and public realm.”

The success of Green Man Lane has been highly praised in the G15 London Housing Report for ‘giving residents a voice on potential designs and the overall management of the regeneration process’ and similarly used as a case study for assisting residents affected by welfare reform during regeneration.
Our brands