03 December 2016
A2Dominion has won the award for ‘Best New Build Project’ for its project: Elmsbrook at NW Bicester, in the 2016 SHIFT Awards. Once complete, Elmsbrook will deliver 393 highly energy efficient homes and a local centre, creating the UK’s first true zero carbon community.

Elmsbrook is the first phase of the 6,000 home NW Bicester eco town. 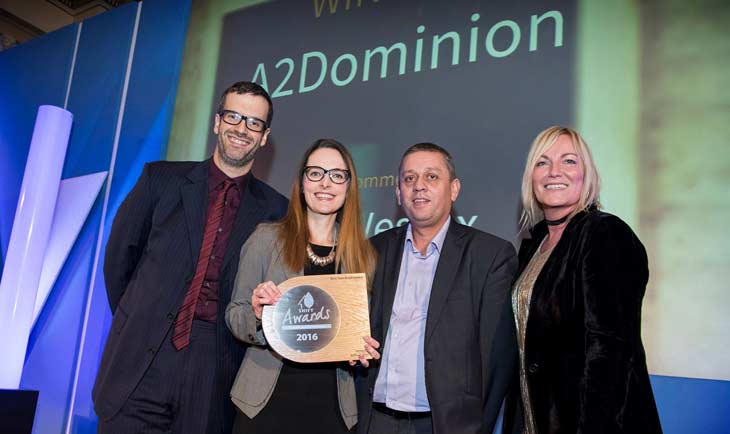 Bicester eco-town Elmsbrook named Best New Build Project
The award winners were announced at the SHIFT Awards ceremony that took place on the 24 November at the Gibson Hall in London, with Marcus Brigstocke compèring the evening’s events. Over 200 leading figures from the housing sector were in attendance.

A2Dominion warded off competition from Antler Homes, First Wessex and Verto Homes to be crowned winners of the ‘Best New Build Project’ category. The Elmsbrook development has been recognised on multiple occasions as a stand out example in establishing sustainable new communities. The key objective of the project has been to make it easy, attractive and affordable for people to live healthy, sustainable lifestyles.

“We are thrilled to see that the work we are doing at NW Bicester is being recognised on an industry-wide scale. The Elmsbrook development is the UK’s first eco-town, and we are hugely excited to be leading the way in sustainability in the housing sector.

“This is an achievement of immense importance to the team at A2Dominion – the SHIFT awards are a highly regarded industry accolade, and we are very happy to be recognised by such a reputable organisation for the ongoing work we are doing at NW Bicester.”

“A2Dominion with its development, Elmsbrook at NW Bicester, has created a beacon of sustainability"
Bevan Jones, Managing Director of Sustainable Homes

The SHIFT Awards are the only industry awards that celebrate sustainability, and this year’s entries required organisations to showcase the ways in which they are providing homes that are both sustainable and of a high standard. This year saw entries from a wide array of organisations, all making the efforts required to really make a difference to the lives of those living in sustainable communities.

“A2Dominion with its development, Elmsbrook at NW Bicester, has created a beacon of sustainability, incorporating the very latest technology and construction methods to create a New Build project of the highest environmental standards. We were very pleased to hand this award to the team at A2Dominion.

“The SHIFT Awards 2016 really did showcase the best in the sector and clearly demonstrate that sustainability is not dead and that it has a major role in creating better homes and businesses whilst enhancing people’s lives.”

For more information about Elmsbrook at NW Bicester, visit www.nwbicester.co.uk.

For more information about the SHIFT Awards, visit www.sustainablehomes.co.uk/event/shift-awards-2016.
Our brands